travelo.club - Guide to the city of Blagaj

Blagaj is a village-town in the south-eastern region of the Mostar basin, in the Herzegovina-Neretva Canton of Bosnia and Herzegovina. It stands at the edge of Bišće plain and is one of the most valuable mixed urban and rural structures in Bosnia and Herzegovina, distinguished from other similar structures in its urban layout. Blagaj was most likely named for its mild weather patterns since blaga in Serbo-Croatian means "mild". Blagaj is situated at the spring of the Buna river and a historical tekke (tekija or Dervish monastery). The Blagaj Tekija was built around 1520, with elements of Ottoman architecture and Mediterranean style and is considered a national monument. Blagaj Tekke is a monastery built for the Dervish cults. 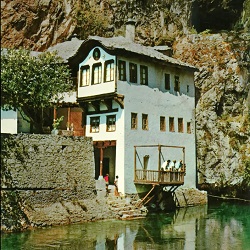