Skopje (Macedonian: Скопје, [ˈskɔpjɛ]) is the capital and largest city of the Republic of Macedonia. It is the country's political, cultural, economic, and academic center. It was known in the Roman period under the name Scupi.
The territory of Skopje has been inhabited since at least 4000 BC; remains of Neolithic settlements have been found within the old Kale Fortress that overlooks the modern city centre. On the eve of the 1st century AD, the settlement was seized by the Romans and became a military camp. When the Roman Empire was divided into eastern and western halves in 395 AD, Scupi came under Byzantine rule from Constantinople. During much of the early medieval period, the town was contested between the Byzantines and the Bulgarian Empire, whose capital it was between 972 and 992. From 1282, the town was part of the Serbian Empire and acted as its capital city from 1346 to 1371. In 1392, the city was conquered by the Ottoman Turks who called the town Üsküp. The town ...

stayed under Turkish control for over 500 years, serving as the capital of pashasanjak of Üsküb and later the Vilayet of Kosovo. At that time the city was famous for its oriental architecture. In 1912, it was annexed by the Kingdom of Serbia during the Balkan Wars and after the First World War the city became part of the newly formed Kingdom of Serbs, Croats and Slovenes (Kingdom of Yugoslavia). In the Second World War the city was conquered by the Bulgarian Army, which was part of the Axis powers. In 1944, it became the capital city of Democratic Macedonia (later Socialist Republic of Macedonia), which was a federal state, part of Democratic Federal Yugoslavia (later Socialist Federal Republic of Yugoslavia). The city developed rapidly after World War II, but this trend was interrupted in 1963 when it was hit by a disastrous earthquake. In 1991, it became the capital city of an independent Macedonia.
Skopje is located on the upper course of the Vardar River, and is located on a major north-south Balkan route between Belgrade and Athens. It is a center for metal-processing, chemical, timber, textile, leather, and printing industries. Industrial development of the city has been accompanied by development of the trade, logistics, and banking sectors, as well as an emphasis on the fields of transportation, culture and sport. According to the last official count from 2002, Skopje has a population of 506,926 inhabitants; according to two more recent unofficial estimates, the city has a population of about 687,086 to 1,000,000 inhabitants. 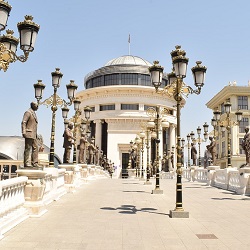