travelo.club - Guide to the city of Nürnberg

Nuremberg (German: Nürnberg; pronounced [ˈnʏɐ̯nbɛɐ̯k]) is a city on the river Pegnitz and on the Rhine–Main–Danube Canal in the German state of Bavaria, in the administrative region of Middle Franconia, about 170 kilometres (110 mi) north of Munich. It is the second-largest city in Bavaria (after Munich), and the largest in Franconia (German: Franken). As of February 2015 it had a population of 517,498, making it Germany's fourteenth-largest city. The urban area also includes Fürth, Erlangen and Schwabach, with a total population of 763,854. As of 2016 the "European Metropolitan Area Nuremberg" had approximately 3.5 million inhabitants. 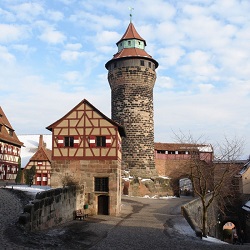