travelo.club - Guide to the city of Flagstaff

Flagstaff is a city in and the county seat of Coconino County in northern Arizona, in the southwestern United States. In 2015, the city's estimated population was 70,320. Flagstaff's combined metropolitan area has an estimated population of 139,097. The city is named after a ponderosa pine flagpole made by a scouting party from Boston (known as the "Second Boston Party") to celebrate the United States Centennial on July 4, 1876. 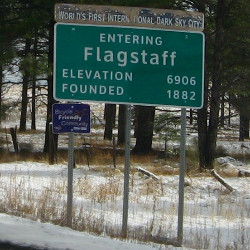