travelo.club - Guide to the city of Alghero

Alghero (Italian pronunciation: [alˈɡɛːro]; Catalan: L'Alguer, pronounced [ɫəɫˈɣe], locally [lalˈɣe]; Sardinian: S'Alighèra; Sassarese: La Liéra), is a town of about 44,000 inhabitants in the Italian insular province of Sassari in northwestern Sardinia, next to the Mediterranean Sea. Part of its population descends from Catalan conquerors from the end of the Middle Ages, when Sardinia was part of the Crown of Aragon. That is why the Catalan language is co-official in the city, unique in Italy, taking the name of alguerès dialect. The name Alghero comes from the medieval Latin Aleguerium, meaning stagnation of algae (Posidonia oceanica) .
Alghero is the fifth university center in the island, coming after Cagliari and Sassari. It hosts the headquarters of the Università degli Studi di Sassari’s Architecture and Design department. In 2012 it was the 10th most visited city by tourists in Italy. 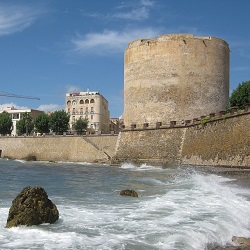