travelo.club - Guide to the city of Vilnius

Vilnius (Lithuanian pronunciation: [ˈvʲɪlʲnʲʊs], see also other names) is the capital of Lithuania and its largest city, with a population of 542,664 as of 2015. Vilnius is located in the southeast part of Lithuania and is the second largest city in the Baltic states. Vilnius is the seat of the main government institutions of Lithuania as well as of the Vilnius District Municipality. Vilnius is classified as a Gamma global city according to GaWC studies, and is known for the architecture in its Old Town, declared a UNESCO World Heritage Site in 1994. Prior to World War II, Vilnius was one of the largest Jewish centers in Europe. Its Jewish influence has led to it being described as the "Jerusalem of Lithuania" and Napoleon named it "the Jerusalem of the North" as he was passing through in 1812. In 2009, Vilnius was the European Capital of Culture, together with the Austrian city of Linz. 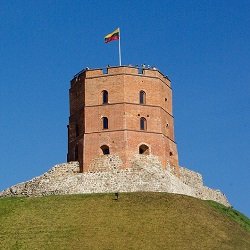