Dallas is a major city in the U.S. state of Texas. It is the most populous city in the Dallas–Fort Worth metroplex, the fourth most populous metropolitan area in the United States. The city's population ranks ninth in the U.S. and third in Texas after Houston and San Antonio. The city's prominence arose from its historical importance as a center for the oil and cotton industries, and its position along numerous railroad lines. The bulk of the city is in Dallas County, of which it is the county seat; however, sections of the city are located in Collin, Denton, Kaufman, and Rockwall counties. According to the 2010 United States Census, the city had a population of 1,197,816. The United States Census Bureau's estimate for the city's population increased to 1,317,929 as of July 1, 2016.
The city is the largest economic center of the 12-county Dallas–Fort Worth metroplex metropolitan area (commonly referred to as DFW), which had a population of 7,246,231 as of July 1, 2016, ...

representing growth in excess of 807,000 people since the 2010 census. In 2016 DFW ascended to the number one spot in the nation in year-over-year population growth. In 2014, the metropolitan economy surpassed Washington, D.C. to become the fifth largest in the U.S., with a 2014 real GDP over $504 billion. As such, the metropolitan area's economy is the 10th largest in the world. In 2013, the metropolitan area led the nation with the largest year-over-year increase in employment and advanced to become the fourth-largest employment center in the nation (behind New York City, Los Angeles and Chicago) with more than three million non-farm jobs. As of January 2017, the metropolitan job count has increased to 3,558,200 jobs. The city's economy is primarily based on banking, commerce, telecommunications, technology, energy, healthcare and medical research, and transportation and logistics. The city is home to the third-largest concentration of Fortune 500 companies in the nation (behind New York City and Houston).
Located in North Texas, Dallas is the main core of the largest metropolitan area in the South and the largest inland metropolitan area in the United States that lacks any navigable link to the sea. Dallas and nearby Fort Worth were developed due to the construction of major railroad lines through the area allowing access to cotton, cattle, and later oil in North and East Texas. The construction of the Interstate Highway System reinforced Dallas' prominence as a transportation hub with four major interstate highways converging in the city, and a fifth interstate loop around it. Dallas developed as a strong industrial and financial center, and a major inland port, due to the convergence of major railroad lines, interstate highways, and the construction of Dallas/Fort Worth International Airport, one of the largest and busiest airports in the world. 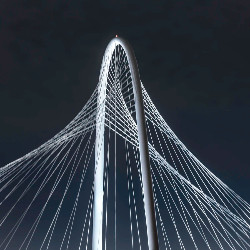