travelo.club - Guide to the city of Telč

Telč (Czech pronunciation: [tɛltʃ]; German: Teltsch) is a town in southern Moravia, near Jihlava, in the Czech Republic. The town was founded in the 13th century as a royal water fort on the crossroads of busy merchant routes between Bohemia, Moravia and Austria.
Besides the monumental 17th-century Renaissance château with an English-style park (a rebuilding of original Gothic castle), the most significant sight is the town square, a unique complex of long urban plaza with well-conserved Renaissance and Baroque houses with high gables and arcades; since 1992 all of this has been a UNESCO World Heritage Site. Originally parking was generally prohibited in the square, but in the 21st century parking regulations have been relaxed and the square is in danger of becoming a parking lot; as seen in the image below entitled 'The Main Square'. By contrast, all the images in the gallery were taken earlier, mostly in the late 20th century.
The Gothic castle was built in the second half of ...

the 14th century. At the end of the 15th century the castle fortifications were strengthened and a new gate-tower built. In the middle of the 16th century the medieval castle no longer satisfied Renaissance nobleman Zachariáš of Hradec, who had the castle altered in the Renaissance style. The ground floor was vaulted anew, the façade decorated with sgraffito, and the state apartments and living quarters received stucco ornamentation together with trompe l'oeil and chiaroscuro paintings in 1553. The counter-reformation brought the Jesuits to the town, who built the church of Name of Jesus in 1666–67, according to the plans of Domenico Orsi. The column of the Virgin and the fountain in the centre of the square date from the 18th century.
Gallery of images of Telc 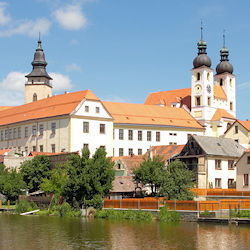