travelo.club - Guide to the city of Regensburg

Regensburg (German pronunciation: [ˈʁeːɡŋ̍sbʊɐ̯k]; Latin: Castra-Regina; Czech: Řezno; French: Ratisbonne; older English: Ratisbon) is a city in south-east Germany, situated at the confluence of the Danube, Naab and Regen rivers. With over 140,000 inhabitants, Regensburg is the fourth-largest city in the State of Bavaria after Munich, Nuremberg and Augsburg. The city is the political, economic and cultural centre of Eastern Bavaria and the capital of the Bavarian administrative region Upper Palatinate.
The medieval centre of the city is a UNESCO World Heritage Site and a testimony of the city's status as cultural centre of southern Germany in the Middle Ages. In 2014, Regensburg was among the top sights and travel attractions in Germany. Generally known in English as Ratisbon until well into the twentieth century, the city is known as Ratisbonne in French and as Ratisbona in Spanish, Italian, Portuguese, Catalan and Albanian. 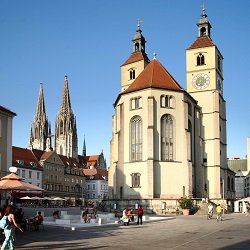