Katowice (Polish: [katɔˈvʲit͡sɛ]; Silesian: Katowicy, German: Kattowitz, officially Miasto Katowice) is a city in southwestern Poland, with a population of 299,910 as of 2015 and the center of the Silesian Metropolis, with a population of 2.2 million.
Throughout the mid-18th century, Katowice had developed into a village upon the discovery of rich coal reserves in the area. In 1742 the Silesian War transferred Upper Silesia, including Katowice, to Prussia. Subsequently, from the second half of the 18th century, many German or Prussian craftsmen, merchants and artists began to settle in the region, which had been inhabited mostly by Poles over the past hundreds of years. Simultaneously Silesia experienced the influx of the first Jewish settlers. In the first half of the 19th century, intensive industrialization transformed local mills and farms into industrial steelworks, mines, foundries and artisan workshops. This also contributed to the establishment of companies and eventual ...

rapid growth of the city. At the same time, Katowice became linked to the railway system with the first train arriving at the main station in 1847.
The outbreak of World War I was favourable for Katowice due to the prospering steel industry. Following Germany's defeat and the Silesian Uprisings, Katowice and parts of Upper Silesia were annexed by the Second Polish Republic. Poland was then backed by the Geneva Convention and the ethnic Silesian minority. On 3 May 1921, the Polish army entered Katowice and the Polish administration took control. The city became the capital of the autonomous Silesian Voivodeship as well as the seat of the Silesian Parliament and Committee of Upper Silesia. After the plebiscite many former German citizens emigrated, however a vibrant German community remained until the end of World War II. In 1939, after the Wehrmacht seized the town, Katowice and the provinces were incorporated into the Third Reich. The town was eventually liberated by the Allies on 27 January 1945.
Katowice is a center of science, culture, industry, business, trade, and transportation in Upper Silesia and southern Poland, and the main city in the Upper Silesian Industrial Region. Katowice lies within an urban zone, with a population of 2,746,460 according to Eurostat, and also part of the wider Silesian metropolitan area, with a population of 5,294,000 according to the European Spatial Planning Observation Network.
Today, the city is considered as an emerging metropolis. The whole metropolitan area is the 16th most economically powerful city by GDP in the European Union with an output amounting to $114.5 billion.
Katowice is the seat of the Polish National Radio Symphony and Orchestra. It also hosts the finals of Intel Extreme Masters, an eSports video game tournament. 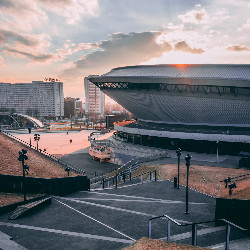