travelo.club - Guide to the city of Rybnik

Rybnik [ˈrɨbɲik] (German: Rybnick) is a city in southwestern Poland, in the Silesian Voivodeship. The city first developed as a fishing centre (rybnik means fishpond in several Slavic languages) in medieval ages, then was a capital of so-called Rybnik State. Rybnik grew as an important centre of coal mining and the seat of the surrounding county in the 19th century. Under Poland's communist rule from 1945-1989 the city was projected to grow as a main mining centre of southern Poland.
The city of Rybnik has a population of about 141,410 as of December 2010 and remains the only powiat grodzki (urban county) in Upper Silesia with an increasing population. The Rybnik area with its large coal mines and power plants is an important economic region of Poland, and a visible center of music, home of the Szafrankowie Brothers State School of Music as well as a Philharmonic Orchestra. 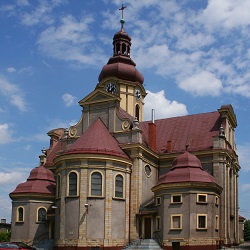