Pripyat (Ukrainian: При́п'ять, Prýp'jat′; Russian: При́пять, Prípyat′ Pronunciation) is a ghost town in northern Ukraine, near the border with Belarus.
Named after the nearby Pripyat River, Pripyat was founded on 4 February 1970, as the ninth nuclear city (a type of closed city) in the Soviet Union, to serve the nearby Chernobyl Nuclear Power Plant. It was officially proclaimed a city in 1979, and had grown to a population of 49,360 by the time it was evacuated, on the afternoon of April 27, 1986, the day after the Chernobyl disaster.
Though Pripyat is located within the administrative district of Ivankiv Raion, the abandoned city now has the status of city of oblast significance within the larger Kiev Oblast (province), being administered directly from Kiev. Pripyat is also supervised by Ukraine's Ministry of Emergencies, which manages activities for the entire Chernobyl Exclusion Zone. 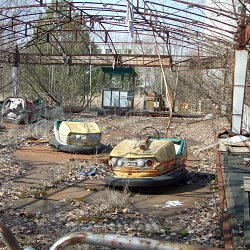