travelo.club - Guide to the city of Southend-on-Sea

Southend-on-Sea, commonly referred to simply as Southend, is a town and wider unitary authority area with borough status in southeastern Essex, England. It lies on the north side of the Thames Estuary, 40 miles (64 km) east of central London. It is bordered to the north by Rochford and to the west by Castle Point. It is home to the longest leisure pier in the world, Southend Pier. London Southend Airport is located 1.5 NM (2.8 km; 1.7 mi) north of the town centre.
Southend-on-Sea originally consisted of a few poor fishermen's huts and farms at the southern end of the village of Prittlewell. In the 1790s, the first buildings around what was to become the High Street of Southend were completed. In the 19th century, Southend's status of a seaside resort grew after a visit from Princess Caroline of Brunswick, and Southend Pier was constructed. From the 1960s onwards, the town declined as a holiday destination, Southend redeveloped itself as the home of the Access credit card, due to it ...

having one of the UK's first electronic telephone exchanges. After the 1960s, much of the town centre was developed for commerce and retail, and many original structures were lost to redevelopment. An annual seafront airshow, started in 1986 when it featured a flypast by Concorde on a passenger charter flight, used to take place each May and became one of Europe's largest free airshows. The show has not been held since 2012 due to a lack of sponsorship and funding cuts. 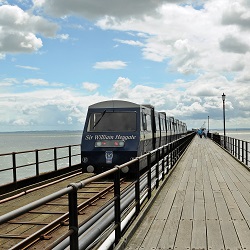