travelo.club - Guide to the city of Eindhoven

Eindhoven (Dutch pronunciation: [ˈɛi̯ntɦoːvə(n)] (About this sound listen)) is a municipality and a city in the south of the Netherlands, originally at the confluence of the Dommel and Gender streams. The Gender was dammed short of the city centre in the 1950s and the Dommel still runs through the city. The city has a population of 223,220 in January 2015,[9] making it the fifth-largest municipality of the Netherlands and the largest in the province of North Brabant.

Neighbouring cities and towns include Asten, Son en Breugel, Nuenen, Geldrop-Mierlo, Heeze-Leende, Waalre, Veldhoven, Eersel, Oirschot and Best. The agglomeration has a population of 337,487. The metropolitan area consists of 419,045 inhabitants. The city region has a population of 753,426. Also, Eindhoven is located in the Brabantse Stedenrij, a combined metropolitan area with about 2 million inhabitants. 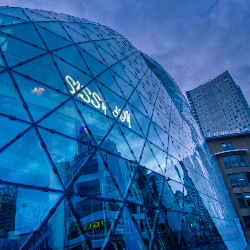