travelo.club - Guide to the city of Dortmund

Dortmund ([ˈdɔɐ̯tmʊnt]; Low German: Düörpm [ˈdyːœɐ̯pm̩]; Latin: Tremonia) is an independent city in North Rhine-Westphalia, Germany. It is in the middle part of the state and is considered to be the administrative, commercial and cultural centre of the eastern Ruhr area. Its population of 581,612 (2015) makes it the 8th largest city in Germany. Moreover, Dortmund is the largest city by area and population in the Ruhr Area, an urban area with some 5.1 million (2011) inhabitants which is the largest urban agglomeration in Germany. 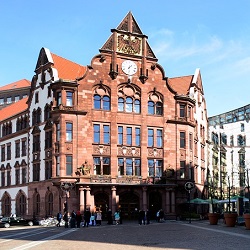