travelo.club - Guide to the city of Zagreb

Zagreb (Croatian pronunciation: [zǎːɡreb]) is the capital and the largest city of Croatia. It is located in the northwest of the country, along the Sava river, at the southern slopes of the Medvednica mountain. Zagreb lies at an elevation of approximately 122 m (400 ft) above sea level. In the last official census of 2011 the population of the City of Zagreb was 792,875. The wider Zagreb metropolitan area includes the City of Zagreb and the separate Zagreb County bringing the total metropolitan area population up to 1,113,111. It is the biggest metropolitan area in Croatia, and the only one with a population of over one million. 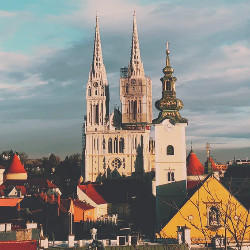