travelo.club - Guide to the city of Córdoba

Córdoba (/ˈkɔːrdəbə/, Spanish: [ˈkoɾðoβa]), also called Cordova (/ˈkɔːrdəvə/) in English, is a city in Andalusia, southern Spain, and the capital of the province of Córdoba. It was a Roman settlement, then colonized by Muslim armies in the eighth century. It became the capital of the Islamic Emirate, and then of the Caliphate of Córdoba, including most of the Iberian Peninsula. Córdoba consisted of hundreds of workshops that created goods such as silk. It was a center of culture and learning in the Muslim golden age. 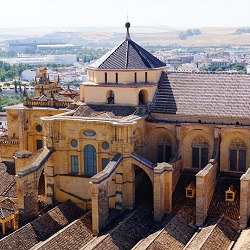