travelo.club - Guide to the city of Koper

Koper (Slovene pronunciation: [ˈkoːpəɾ] (About this sound listen)) (Italian: Capodistria) is a city in southwestern Slovenia, with the other Slovenian coastal towns Ankaran, Izola, Piran, and Portorož, situated along the country's 47-kilometre (29-mile) coastline, in the Istrian Region, approximately five kilometres (3.1 miles) from its border with Italy. Having a unique ecology and biodiversity, it is considered an important national natural resource. The city's Port of Koper is the major contributor to the economy of the eponymous city municipality. With only one percent of Slovenia having a coastline, the influence that the Port of Koper also has on tourism was a factor in Ankaran deciding to leave the municipality in a referendum in 2011 to establish its own. The city is a destination on a number of Mediterranean cruising lines. In 2016, the city expects 65 cruise ship arrivals (for example: Norwegian Spirit, MSC Magnifica, Norwegian Jade, MS Rhapsody of the Seas...) with the ...

season spanning from March to December. Koper is the main urban centre of the Slovenian Istria, with a population of about 25,000. 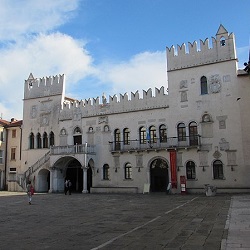