travelo.club - Guide to the city of Calella

Calella (Catalan pronunciation: [kəˈɫeʎə]) is a seaside city on the Costa del Maresme, 58 km northeast of Barcelona, in Catalonia, Spain. It is located on the coast between Sant Pol de Mar and Pineda de Mar. Prior to the arrival of tourism in the 1960s, economic activity of the town was primarily focused on textile manufacture and fishing.

The town is overlooked from the southwest by a lighthouse, which was built in 1859, and two towers known as "Les Torretes", which are the remains of a Semaphore line constructed in the mid-19th century. 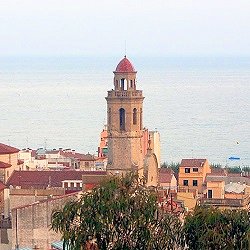