Xagħra (Maltese: Ix-Xagħra) is a village on the island of Gozo in Malta. It is possibly the earliest inhabited part of Gozo, being home to the Ġgantija megalithic temples, the Xagħra Stone Circle, as well as natural underground features such as Xerri's Grotto and Ninu's Cave. It is the largest village in Gozo after the capital Victoria, with a population of 4,886 people as of March 2014. During the British period of its history, Xagħra was known as Caccia. However, this name was used during the rule of the Knights Hospitallers and the French. 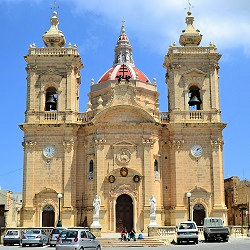