travelo.club - Guide to the city of Rimini

Rimini (Italian pronunciation: [ˈriːmini]; Romagnol: Rémin; Latin: Ariminum[1]) is a city of about 150,000 inhabitants in the Emilia-Romagna region of northern Italy and capital city of the Province of Rimini. It is located on the Adriatic Sea, on the coast between the rivers Marecchia (the ancient Ariminus) and Ausa (ancient Aprusa). It is one of the most famous seaside resorts in Europe, thanks to its 15-kilometre-long (9 mi) sandy beach, over 1,000 hotels, and thousands of bars, restaurants and discos. The first bathing establishment opened in 1843. An art city with ancient Roman and Renaissance monuments, Rimini is the hometown of the famous film director Federico Fellini as well.

Founded by the Romans in 268 BC, throughout their period of rule Rimini was a key communications link between the north and south of the peninsula, and on its soil Roman emperors erected monuments like the Arch of Augustus and the Tiberius Bridge, while during the Renaissance, the city benefited ...

from the court of the House of Malatesta, which hosted artists like Leonardo da Vinci and produced works such as the Tempio Malatestiano.

In the 19th century, Rimini was one of the most active cities in the revolutionary front, hosting many of the movements aimed at Italian unification. In the course of World War II, the city was the scene of clashes and bombings, but also of a fierce partisan resistance that earned it the honour of a gold medal for civic valor. Finally, in recent years it has become one of the most important sites for trade fairs and conferences in Italy.

The total approximate population of the Rimini urban area is 225,000 and the provincial population is 330,000. 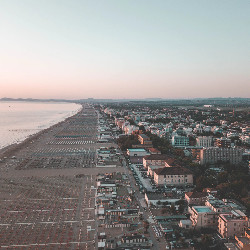