travelo.club - Guide to the city of Gibraltar

Gibraltar (/dʒɪˈbrɔːltər/; Spanish pronunciation: [xiβɾalˈtaɾ]) is a British Overseas Territory located at the southern tip of the Iberian Peninsula. It has an area of 6.7 km2 (2.6 sq mi) and is bordered to the north by Spain. The landscape is dominated by the Rock of Gibraltar at the foot of which is a densely populated city area, home to over 30,000 people, primarily Gibraltarians. It shares a maritime border with Morocco. Under the Gibraltar constitution of 2006, Gibraltar has limited powers of self-government, with some responsibilities, such as defence and foreign relations, remaining with the British government. 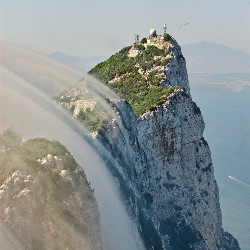