travelo.club - Guide to the city of Luxembourg

Luxembourg (Luxembourgish: Lëtzebuerg, French: Luxembourg, German: Luxemburg),[pron 1] also known as Luxembourg City (Luxembourgish: Stad Lëtzebuerg or d'Stad, French: Ville de Luxembourg, German: Stadt Luxemburg, Luxemburg-Stadt), is the capital city of the Grand Duchy of Luxembourg (also named "Luxembourg"), and the country's most populous commune. Standing at the confluence of the Alzette and Pétrusse rivers in southern Luxembourg, the city lies at the heart of Western Europe, situated 213 km (132 mi) by road from Brussels, 372 km (231 mi) from Paris, and 209 km (130 mi) from Cologne. The city contains Luxembourg Castle, established by the Franks in the Early Middle Ages, around which a settlement developed. 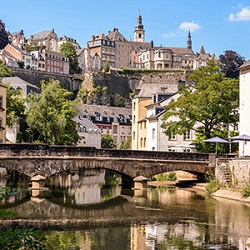