travelo.club - Guide to the city of Visakhapatnam

Visakhapatnam (also known as Vizag (/vaɪzɑːɡ/) and Waltair (/wɒltɛər/) is the largest city and the financial capital of the Indian state of Andhra Pradesh. The city is the administrative headquarters of Visakhapatnam district and the Eastern Naval Command of the Indian Navy, State headquarters of Indian Coast Guard. Its geographical location is amidst the Eastern Ghats and the coast of the Bay of Bengal. It is the most populous city in the state with a population of 2,035,922 as of 2011, making it the 14th largest city in the country. It is also the 9th most populous metropolitan area in India with a population of 60,53,000. With an output of $43.5 billion, Visakhapatnam is the ninth-largest contributor to India's overall gross domestic product as of 2016. 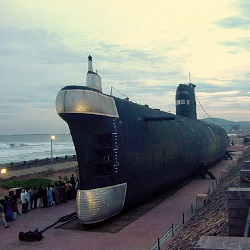