travelo.club - Guide to the city of Antequera

Antequera (Spanish pronunciation: [anteˈkeɾa]) is a city and municipality in the Comarca de Antequera, province of Málaga, part of the Spanish autonomous community of Andalusia. It is known as "the heart of Andalusia" (el corazón de Andalucía) because of its central location among Málaga, Granada, Córdoba, and Seville. The Antequera Dolmens Site is a UNESCO World Heritage site.

In 2011, Antequera had a population of 41,854. It covers an area of 749.34 km2 with a population density of 55.85 inhabitants/km2, and is situated at an altitude of 575 meters. Antequera is the most populous city in the interior of the province and the largest in area. It is the twenty-second largest in Spain. The city is located 45 km from Málaga and 115 km from Córdoba. The cities are connected by a high speed train and the A-45 motorway. Antequera is 160 km from Seville and 102 km from Granada, which is connected by motorway A-92 and will be in the near future connected by the high-speed ... 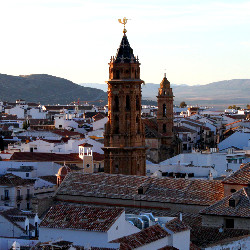