travelo.club - Guide to the city of Prešov

Prešov (Slovak pronunciation: [ˈpreʃow], Hungarian: Eperjes, German: Eperies, Preschau, Ukrainian: Пряшів) is a city in Eastern Slovakia. It is a seat of the administrative Prešov Region (Slovak: Prešovský kraj) and Šariš as well as the historic Szepes County of the Kingdom of Hungary. With a population of approximately 91,352, it is the third-largest city in Slovakia. It lends its name to the Eperjes-Tokaj Hill-Chain. There are many tourist attractions in Prešov such as castles, pools and the old town. 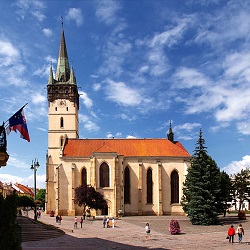