travelo.club - Guide to the city of Trnava

Trnava (Slovak pronunciation: [ˈtr̩naʋa], also known by other alternative names) is a city in western Slovakia, 47 km (29 mi) to the north-east of Bratislava, on the Trnávka river. It is the capital of a kraj (Trnava Region) and of an okres (Trnava District). It is the seat of a Roman Catholic archbishopric (1541–1820 and then again since 1977). The city has a historic center. Because of the many churches within its city walls, Trnava has often been called "parva Roma", i.e. "Little Rome", or more recently, the "Slovak Rome". 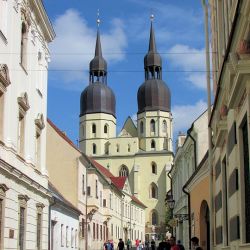