Chorvátsky Grob (Croatian: Hrvatski Grob, Hungarian: Horvátgurab, Horvát-Gurab, German: Kroatisch-Eisgrub) is a village and municipality in western Slovakia in Senec District in the Bratislava region.
The village's name Chorvátsky means Croatian. This refers to the Croatian people that have lived in the area since the early 16th century. This population arrived here after escaping the area between Sisak and Kostajnica during the Ottoman Wars. The area was settled by Croatians escaping from Turkish Ottoman raids which helps explain the etymology of the present-day name from "Horvát Gurab" to "Chorvátsky Grob" (Croatian Grave) used at the present time.
According to the local municipality website of Chorvátsky Grob the Slovak word for "grob" is " hrob" or, in English "grave". Reportedly, this place was named in memory of soldiers, though it is not clear if those soldiers were Croatian, Slovaks, or another nationality.
Chorvátsky Grob has a population of 3162 people (2009-12-31). 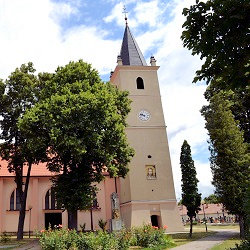