travelo.club - Guide to the city of Martin

Martin; Slovak: Turčiansky Svätý Martin until 1950, Hungarian: Turócszentmárton, German: Turz-Sankt Martin, Latin: Sanctus Martinus / Martinopolis) is a city in northern Slovakia, situated on the Turiec river, between the Malá Fatra and Veľká Fatra mountains, near the city of Žilina. The population numbers approximately 55 000, which makes it the eighth largest city in Slovakia. It is the center of the Turiec region and the District of Martin. 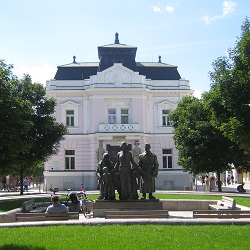