travelo.club - Guide to the city of Košice

Košice (Slovak pronunciation: [ˈkoʃit͡se], also known by other alternative names) is the biggest city in eastern Slovakia and in 2013 was the European Capital of Culture (together with Marseille, France). It is situated on the river Hornád at the eastern reaches of the Slovak Ore Mountains, near the border with Hungary. With a population of approximately 240,000, Košice is the second largest city in Slovakia after the capital Bratislava.
Being the economic and cultural centre of eastern Slovakia, Košice is the seat of the Košice Region and Košice Self-governing Region, the Slovak Constitutional Court, three universities, various dioceses, and many museums, galleries, and theatres. Košice is an important industrial centre of Slovakia, and the U.S. Steel Košice steel mill is the largest employer in the city. The town has extensive railway connections and an international airport.
The city has a well-preserved historical centre, which is the largest among Slovak towns. There ...

are many heritage protected buildings in Gothic, Renaissance, Baroque, and Art Nouveau styles with Slovakia's largest church: the St. Elisabeth Cathedral. The long main street, rimmed with aristocratic palaces, Catholic churches, and townsfolk's houses, is a thriving pedestrian zone with many boutiques, cafés, and restaurants. The city is well known as the first settlement in Europe to be granted its own coat-of-arms. 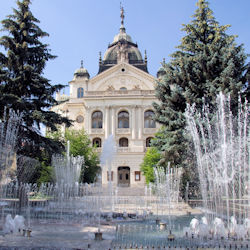