travelo.club - Guide to the city of Bojnice

Bojnice (Hungarian: Bajmóc, German: Weinitz) is a historical town in central Slovakia at the upper Nitra river, near the city of Prievidza. It has population of 4,983 (2005). Bojnice is best known for its tourist attractions: the oldest zoo in Slovakia, the most visited castle, and one of the oldest spa towns in Slovakia. The town is situated below the Bojnice Castle, which is built on travertine rock with a natural cave. The castle has appeared in many international films and a well-known international festival of spectres takes place there every year. 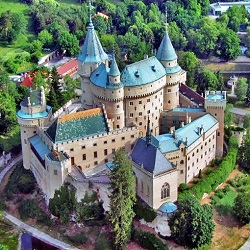