travelo.club - Guide to the city of Brno

Brno (English: ; Czech pronunciation: [ˈbr̩no], German: Brünn) is the second largest city in the Czech Republic by population and area, the largest Moravian city, and the historical capital city of the Margraviate of Moravia. Brno is the administrative center of the South Moravian Region in which it forms a separate district (Brno-City District). The city lies at the confluence of the Svitava and Svratka rivers and has about 400,000 inhabitants; its greater metropolitan area is home to more than 800,000 people while its larger urban zone had a population of about 730,000 in 2004.
Brno is the seat of judicial authority of the Czech Republic – it is the seat of the Constitutional Court, the Supreme Court, the Supreme Administrative Court, and the Supreme Public Prosecutor's Office. The city is also a significant administrative centre. It is the seat of a number of state authorities, including the Ombudsman, and the Office for the Protection of Competition. Brno is also an important ...

centre of higher education, with 33 faculties belonging to 13 institutes of higher learning and about 89,000 students.
Brno Exhibition Centre ranks among the largest exhibition centres in Europe (23rd in the world). The complex opened in 1928 and established the tradition of large exhibitions and trade fairs held in Brno. Brno hosts motorbike and other races on the Masaryk Circuit, a tradition established in 1930, in which the Road Racing World Championship Grand Prix is one of the most prestigious races. Another cultural tradition is an international fireworks competition, Ignis Brunensis, that usually attracts tens of thousands of daily visitors.
The most visited sights of the city include the Špilberk castle and fortress and the Cathedral of Saints Peter and Paul on Petrov hill, two medieval buildings that dominate the cityscape and are often depicted as its traditional symbols. The other large preserved castle near the city is Veveří Castle by Brno Reservoir. This castle is the site of a number of legends, as are many other places in Brno. Another architectural monument of Brno is the functionalist Villa Tugendhat which has been included on the UNESCO list of World Heritage Sites. One of the natural sights nearby is the Moravian Karst. 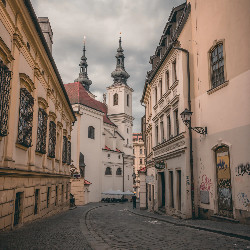