Ostrava (Polish: Ostrawa, German: Ostrau or Mährisch Ostrau) is a city in the north-east of the Czech Republic and is the capital of the Moravian-Silesian Region. It is 15 km from the border with Poland, at the meeting point of four rivers: the Odra, Opava, Ostravice and Lučina. In terms of both population and area Ostrava is the third largest city in the Czech Republic, the second largest city in Moravia, and the largest city in Czech Silesia; it straddles the border of the two historic provinces of Moravia and Silesia. The population was around 300,000 in 2013. The wider conurbation – which also includes the towns of Bohumín, Doubrava, Havířov, Karviná, Orlová, Petřvald and Rychvald – is home to around 500,000 people, making it the largest urban area in the Czech Republic apart from the capital, Prague.
Ostrava grew to prominence thanks to its position at the heart of a major coalfield, becoming an important industrial centre. It used to be nicknamed the country’s ...

"steel heart" thanks to its status as a coal-mining and metallurgical centre, but since the Velvet Revolution (the fall of communism in 1989) it has undergone radical and far-reaching changes to its economic base. Industries have been thoroughly restructured, and the last coal was mined in the city in 1994. However, the city's industrial past lives on in the Lower Vítkovice area, a former coal-mining, coke production and ironworks complex in the city centre boasting a unique collection of historic industrial architecture. Lower Vítkovice has applied for inclusion in the UNESCO World Heritage List.
Since the 1990s Ostrava has been transformed into a modern cultural city, with numerous theatres, galleries and other cultural facilities. It hosts a wide range of cultural and sporting events throughout the year. Among the best known are the Colours of Ostrava multi-genre music festival, the Janáček May classical music festival, the Summer Shakespeare Festival and NATO Days. Ostrava is home to two public universities: the VŠB-Technical University and the University of Ostrava. In 2014 Ostrava was a European City of Sport. The city co-hosted (with Prague) the IIHF Ice Hockey World Championship in 2004 and 2015. 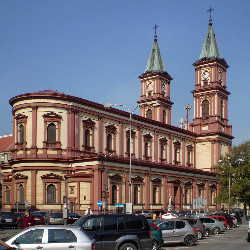