travelo.club - Guide to the city of Trier

Trier (German pronunciation: [tʁiːɐ̯]; Luxembourgish: Tréier [ˈtʀɜɪɐ]), formerly known in English as Treves (French: Trèves, IPA: [tʁɛv]) and Triers (see also names in other languages), is a city in Germany on the banks of the Moselle. Trier lies in a valley between low vine-covered hills of red sandstone in the west of the state of Rhineland-Palatinate, near the border with Luxembourg and within the important Moselle wine region.
Founded by the Celts in the late-4th century BC as Treuorum, it was later conquered by the Romans in the late-1st century BC and renamed Trevorum or Augusta Treverorum (Latin for "The City of Augustus among the Treveri"). Trier may be the oldest city in Germany. It is also the oldest seat of a bishop north of the Alps. In the Middle Ages, the Archbishop-Elector of Trier was an important prince of the church, as the archbishop-electorate controlled land from the French border to the Rhine. The Archbishop-Elector also had great significance as one ...

of the seven electors of the Holy Roman Empire.
With an approximate population of 105,000, Trier is the fourth-largest city in its state, after Mainz, Ludwigshafen, and Koblenz. The nearest major cities are Luxembourg (50 km or 31 mi to the southwest), Saarbrücken (80 kilometres or 50 miles southeast), and Koblenz (100 km or 62 mi northeast).
The University of Trier, the administration of the Trier-Saarburg district and the seat of the ADD (Aufsichts- und Dienstleistungsdirektion), which until 1999 was the borough authority of Trier, and the Academy of European Law (ERA) are all based in Trier. It is one of the five "central places" of the state of Rhineland-Palatinate. Along with Luxembourg, Metz and Saarbrücken, fellow constituent members of the QuattroPole union of cities, it is central to the greater region encompassing Saar-Lor-Lux (Saarland, Lorraine and Luxembourg), Rhineland-Palatinate, and Wallonia. 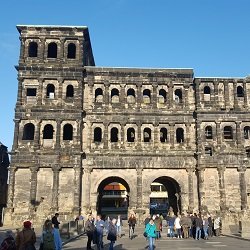