travelo.club - Guide to the city of Nancy

Nancy (French pronunciation: ​[nɑ̃si]; German: Nanzig[1]) is the capital of the north-eastern French department of Meurthe-et-Moselle, and formerly the capital of the Duchy of Lorraine, and then the French province of the same name. The metropolitan area of Nancy had a population of 410,509 inhabitants at the 1999 census, 103,602 of whom lived in the city of Nancy proper (105,067 inhabitants in the city proper as of 2012 estimates).

The motto of the city is Non inultus premor, Latin for "I'm not touched with impunity"—a reference to the thistle, which is a symbol of Lorraine.

Place Stanislas, a large square built between March 1752 and November 1755 by Stanislaus I of Poland to link the medieval old town of Nancy and the new town built under Charles III in the 17th century, is a UNESCO World Heritage Site. 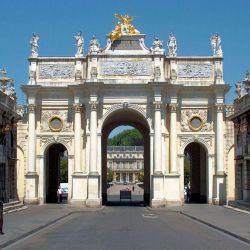