travelo.club - Guide to the city of Augsburg

Augsburg (German pronunciation: [ˈʔaʊ̯ksbʊʁk]; Bavarian: Augschburg) is a city in Swabia, Bavaria, Germany. It was a Free Imperial City for over 500 years.
It is a university town and home of the Regierungsbezirk Schwaben and the Bezirk Schwaben. Augsburg is an urban district and home to the institutions of the Landkreis Augsburg. It is the third-largest city in Bavaria (after Munich and Nuremberg) with a population of 286,000 citizens. After Neuss and Trier, Augsburg is Germany's third oldest city, being founded by the Romans as Augusta Vindelicorum, named after the Roman emperor Augustus.
Augsburg is the only German city with its own legal holiday, the Augsburger Hohes Friedensfest, celebrated on August 8 of every year. This gives Augsburg more legal holidays than any other region or city in Germany.
Augsburg was the home of two patrician families that rose to great prominence internationally, replacing the Medicis as Europe's leading bankers, the Fugger and the Welser ... 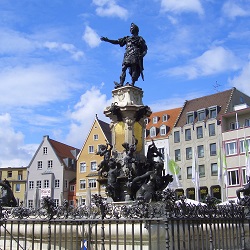