Tampa is a major city in, and the county seat of, Hillsborough County, Florida, United States. It is located on the west coast of Florida on Tampa Bay, near the Gulf of Mexico, and is the largest city in the Tampa Bay Area. The city had a population of 335,709 at the 2010 census, and an estimated population of 377,165 in 2016.
Archaeological evidence indicates that the shores of Tampa Bay were inhabited by indigenous peoples for thousands of years. The Safety Harbor culture developed in the area around the year 1000 AD, and the descendant Tocobaga and Pohoy chiefdoms were living in or near the current city limits of Tampa when the area was first visited by Spanish explorers in the 16th century. Interactions between native peoples and the Spanish were brief and often violent, and although the newcomers did not stay for long, they introduced European diseases which brought the total collapse of native societies across the entire Florida peninsula over the ensuing decades. Although Spain ...

claimed all of Florida and beyond as part of New Spain, it did not found a colony on the west coast. After the disappearance of the indigenous populations, there were no permanent settlements in the Tampa Bay area until after the United States acquired Florida from Spain in 1821.
In 1824, the United States Army established a frontier outpost called Fort Brooke at the mouth of the Hillsborough River, near the site of today's Tampa Convention Center downtown. The first civilian residents were pioneer ranchers and farmers who settled near the fort for protection from the nearby Seminole population. The town grew slowly, and had become a minor shipping port for cattle and citrus by the time of the United States Civil War. Tampa Bay was blockaded by the United States Navy during the war, and Tampa fell into a long period of economic stagnation that continued long after the war ended. The situation finally improved in the 1880s, when the first railroad links, the discovery of phosphate, and the arrival of the cigar industry jump-started its development, helping Tampa to grow from an isolated village with less than 800 residents in 1880 to a bustling city of over 30,000 by the early 1900s.
Today, Tampa is part of the metropolitan area most commonly referred to as the "Tampa Bay Area". For U.S. Census purposes, Tampa is part of the Tampa-St. Petersburg-Clearwater, Florida Metropolitan Statistical Area. The four-county area is composed of roughly 2.9 million residents, making it the second largest metropolitan statistical area (MSA) in the state, and the fourth largest in the Southeastern United States, behind Miami, Washington, D.C. and Atlanta. The Greater Tampa Bay area has over 4 million residents and generally includes the Tampa and Sarasota metro areas. The Tampa Bay Partnership and U.S. Census data showed an average annual growth of 2.47 percent, or a gain of approximately 97,000 residents per year. Between 2000 and 2006, the Greater Tampa Bay Market experienced a combined growth rate of 14.8 percent, growing from 3.4 million to 3.9 million and hitting the 4 million population mark on April 1, 2007. A 2012 estimate shows the Tampa Bay area population to have 4,310,524 people and a 2017 projection of 4,536,854 people.
Tampa was ranked as the 5th best outdoor city by Forbes in 2008. Tampa also ranks as the fifth most popular American city, based on where people want to live, according to a 2009 Pew Research Center study. A 2004 survey by the New York University newspaper Washington Square News ranked Tampa as a top city for "twenty-somethings." Tampa is ranked as a "Gamma+" world city by Loughborough University, ranked alongside other world cities such as Phoenix, Charlotte, Rotterdam, and Santo Domingo. 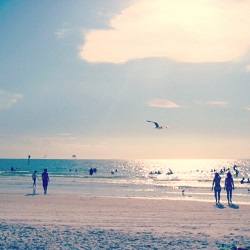