San Francisco (initials SF) (, Spanish for Saint Francis; Spanish: [san franˈsisko]), officially the City and County of San Francisco, is the cultural, commercial, and financial center of Northern California. Located at the north end of the San Francisco Peninsula, San Francisco is about 47.9 square miles (124 km2) in area, making it the smallest county—and the only consolidated city-county—within the state of California. With a density of about 18,581 people per square mile (7,174 people per km2), San Francisco is the most densely settled large city (population greater than 200,000) in California and the second-most densely populated major city in the United States after New York City. San Francisco is the fourth-most populous city in California, after Los Angeles, San Diego, and San Jose, and the 13th-most populous city in the United States—with a census-estimated 2016 population of 870,887. The city and its surrounding areas are known as the San Francisco Bay Area, and are a ...

part of the larger OMB-designated San Jose-San Francisco-Oakland combined statistical area, the fifth most populous in the nation with an estimated population of 8.7 million.
San Francisco was founded on June 29, 1776, when colonists from Spain established Presidio of San Francisco at the Golden Gate and Mission San Francisco de Asís a few miles away, all named for St. Francis of Assisi. The California Gold Rush of 1849 brought rapid growth, making it the largest city on the West Coast at the time. San Francisco became a consolidated city-county in 1856. After three-quarters of the city was destroyed by the 1906 earthquake and fire, San Francisco was quickly rebuilt, hosting the Panama-Pacific International Exposition nine years later. In World War II, San Francisco was a major port of embarkation for service members shipping out to the Pacific Theater. It then became the birthplace of the United Nations in 1945. After the war, the confluence of returning servicemen, massive immigration, liberalizing attitudes, along with the rise of the "hippie" counterculture, the Sexual Revolution, the Peace Movement growing from opposition to United States involvement in the Vietnam War, and other factors led to the Summer of Love and the gay rights movement, cementing San Francisco as a center of liberal activism in the United States. Politically, the city votes strongly along liberal Democratic Party lines.
A popular tourist destination, San Francisco is known for its cool summers, fog, steep rolling hills, eclectic mix of architecture, and landmarks, including the Golden Gate Bridge, cable cars, the former Alcatraz Federal Penitentiary, Fisherman's Wharf, and its Chinatown district. San Francisco is also the headquarters of five major banking institutions and various other companies such as Levi Strauss & Co., Gap Inc., Salesforce.com, Dropbox, Reddit, Square, Inc., Dolby, Airbnb, Weebly, Pacific Gas and Electric Company, Yelp, Pinterest, Twitter, Uber, Lyft, Mozilla, Wikimedia Foundation, Craigslist and Weather Underground. It has several nicknames, including "The City by the Bay", "Fog City", "San Fran", and "Frisco", as well as older ones like "The City that Knows How", "Baghdad by the Bay", "The Paris of the West", or simply "The City". As of 2016, San Francisco is ranked high on world liveability rankings. 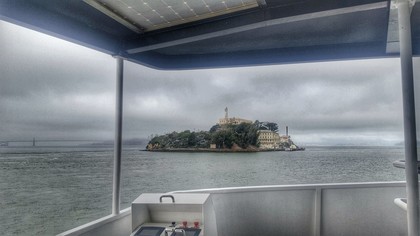 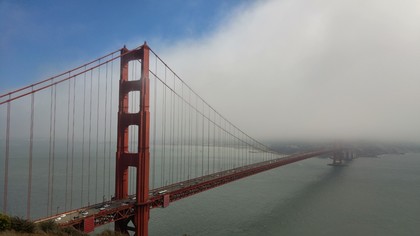 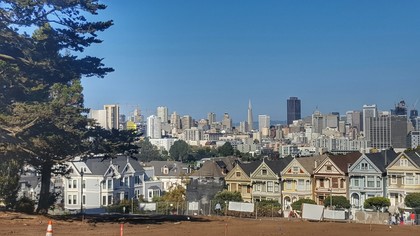 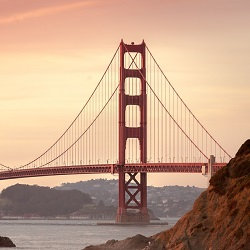