travelo.club - Guide to the city of Chester

Chester is a walled city in Cheshire, England, on the River Dee, close to the border with Wales. With a population of 118,200 in 2011, it is the most populous settlement of Cheshire West and Chester, which had a population of 332,200 in 2014. Chester was granted city status in 1541.
Chester was founded as a "castrum" or Roman fort with the name Deva Victrix in the reign of the Emperor Vespasian in 79 AD. One of the main army camps in Roman Britain, Deva later became a major civilian settlement. In 689, King Æthelred of Mercia founded the Minster Church of West Mercia, which later became Chester's first cathedral, and the Saxons extended and strengthened the walls to protect the city against the Danes. Chester was one of the last cities in England to fall to the Normans. William the Conqueror ordered the construction of a castle, to dominate the town and the nearby Welsh border.
Chester is one of the best preserved walled cities in Britain. It has a number of medieval buildings, ...

but some of the black-and-white buildings within the city centre are Victorian restorations. Apart from a 100-metre (330 ft) section, the listed Grade I walls are almost complete. The Industrial Revolution brought railways, canals, and new roads to the city, which saw substantial expansion and development – Chester Town Hall and the Grosvenor Museum are examples of Victorian architecture from this period. 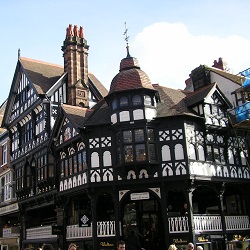