until 1927 when a decree ordered that the capital of the Canary Islands be shared, as it remains at present. The port is of great importance and is the communications hub between Europe, Africa and Americas, with cruise ships arriving from many nations. The city is the focus for domestic and inter-island communications in the Canary Islands.
The city is home to the Parliament of the Canary Islands, the Canarian Ministry of the Presidency (shared on a four-year cycle with Las Palmas), one half of the Ministries and Boards of the Canarian Government, (the other half being located in Gran Canaria), the Tenerife Provincial Courts and two courts of the Superior Court of Justice of the Canary Islands. There are several faculties of the La Laguna University in Santa Cruz, including the Fine Arts School and the Naval Sciences Faculty. Its harbour is one of Spain's busiest; it comprises three sectors. It is important for commercial and passenger traffic, as well as for being a major stopover for cruisers en route from Europe to the Caribbean. The city also has one of the world's largest carnivals. The Carnival of Santa Cruz de Tenerife now aspires to become a World Heritage Site, and is the most important of Spain and the second largest in the world.
The main landmarks of the city include the Auditorio de Tenerife (Auditorium of Tenerife), the Santa Cruz Towers (Torres de Santa Cruz) and the Iglesia de la Concepción. Santa Cruz de Tenerife hosts the first headquarters of the Center UNESCO in the Canary Islands. In recent years the city of Santa Cruz de Tenerife has seen the construction of a significant number of modern structures and the city's skyline is the sixth in height across the country, only behind Madrid, Benidorm, Barcelona, Valencia and Bilbao.
In 2012, the British newspaper The Guardian included Santa Cruz de Tenerife in the list of the five best places in the world to live. 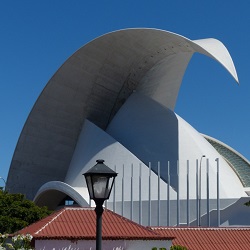