travelo.club - Guide to the city of Brighton

Brighton is a seaside resort on the south coast of England that is part of the city of Brighton and Hove, located 47 miles (76 km) south of London.Archaeological evidence of settlement in the area dates back to the Bronze Age, Roman and Anglo-Saxon periods. The ancient settlement of "Brighthelmstone" was documented in the Domesday Book (1086). The town's importance grew in the Middle Ages as the Old Town developed, but it languished in the early modern period, affected by foreign attacks, storms, a suffering economy and a declining population. Brighton began to attract more visitors following improved road transport to London and becoming a boarding point for boats travelling to France. The town also developed in popularity as a health resort for sea bathing as a purported cure for illnesses.
In the Georgian era, Brighton developed as a fashionable seaside resort, encouraged by the patronage of the Prince Regent, later King George IV, who spent much time in the town and constructed ...

the Royal Pavilion in the Regency era. Brighton continued to grow as a major centre of tourism following the arrival of the railways in 1841, becoming a popular destination for day-trippers from London. Many of the major attractions were built in the Victorian era, including the Metropole Hotel (now Hilton) Grand Hotel, the West Pier, and the Brighton Palace Pier. The town continued to grow into the 20th century, expanding to incorporate more areas into the town's boundaries before joining the town of Hove to form the unitary authority of Brighton and Hove in 1997, which was granted city status in 2000. Today, Brighton and Hove district has a resident population of about 288,200 and the wider Brighton and Hove conurbation has a population of 474,485 (2011 census).Brighton's location has made it a popular destination for tourists, renowned for its diverse communities, quirky shopping areas, large cultural, music and arts scene and its large LGBT population, leading to its recognition as the "unofficial gay capital of the UK". Brighton attracted 7.5 million day visitors in 2015/16 and 4.9 million overnight visitors, and is the most popular seaside destination in the UK for overseas tourists. Brighton has also been called the UK's "hippest city", and "the happiest place to live in the UK". 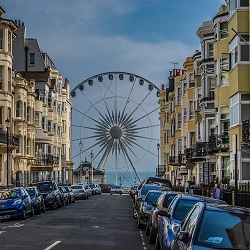