travelo.club - Guide to the city of Banská Bystrica

Banská Bystrica (Slovak pronunciation: [ˈbanskaː ˈbistritsa], also known by other alternative names) is a city in central Slovakia located on the Hron River in a long and wide valley encircled by the mountain chains of the Low Tatras, the Veľká Fatra, and the Kremnica Mountains. With 78 327 inhabitants, Banská Bystrica is the sixth most populous municipality in Slovakia. The present town was founded by German settlers, however it was built upon a former Slavic settlement. It obtained the municipal privileges of a free royal town of the Kingdom of Hungary in 1255. The copper mining town acquired its present picturesque look in the Late Middle Ages when the prosperous burghers built its central churches, mansions, and fortifications. It is the capital of the kraj (Banská Bystrica Region) and the okres (Banská Bystrica District). It is also the home of Matej Bel University. As a historical city with an easy access to the surrounding mountains, Banská Bystrica is a popular ... 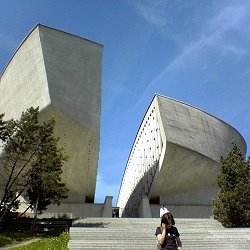