travelo.club - Guide to the city of Rotterdam

Rotterdam ( or ; Dutch: [ˌrɔtərˈdɑm]) is a city in the Netherlands, in South Holland within the Rhine–Meuse–Scheldt river delta at the North Sea. Its history goes back to 1270 when a dam was constructed in the Rotte river by people settled around it for safety. In 1340, Rotterdam was granted city rights by the Count of Holland.
A major logistic and economic centre, Rotterdam is Europe's largest port and has a population of 633,471 (2017), the second-largest in the Netherlands, just behind Amsterdam.
Rotterdam is known for the Erasmus University, its riverside setting, lively cultural life and maritime heritage. The near-complete destruction of the city centre in the World War II Rotterdam Blitz has resulted in a varied architectural landscape, including sky-scrapers, an uncommon sight in other Dutch cities, designed by renowned architects like Rem Koolhaas, Piet Blom and Ben van Berkel.
Rotterdam's logistic success is based on its strategic location on the North Sea, at the ...

mouth of the Nieuwe Maas channel leading into the Rhine–Meuse–Scheldt delta. The rivers Rhine, Meuse, and Scheldt give waterway access into the heart of Western Europe, including the highly industrialized Ruhr. The extensive distribution system including rail, roads, and waterways have earned Rotterdam the nicknames "Gateway to Europe" and "Gateway to the World". 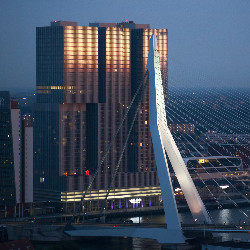