travelo.club - Guide to the city of El Jadida

El Jadida (Berber: Mazaɣan, ⵎⴰⵣⴰⵗⴰⵏ, Arabic: الجديدة or مازاغان‎‎, Portuguese: Mazagão) is a port city on the Atlantic coast of Morocco, located 106 km south of the city of Casablanca in the region of Doukkala-Abda and the province of El Jadida. It has a population of 194,934 (2014 census). From the sea, El Jadida's old city has a very "un-Moorish" appearance; it has massive Portuguese walls of hewn stone.

The Portuguese Fortified City of Mazagan was registered as a UNESCO World Heritage Site in 2004, on the basis of its status as an "outstanding example of the interchange of influences between European and Moroccan cultures" and as an "early example of the realisation of the Renaissance ideals integrated with Portuguese construction technology". According to UNESCO, the most important buildings from the Portuguese period are the cistern, and the Manueline Church of the Assumption.
The city, and particularly its neighboring town of Sidi Bouzid, ...

becomes extremely busy in the summer season with an influx of mainly Moroccan holiday-makers. Nearby is the five-star resort complex of Mazagan, which attracts the Moroccan elite as well as many international visitors from the Persian Gulf as well as from Europe and beyond. Mazagan has a golf course designed by Gary Player, casino, nightclub and restaurants. Between Mazagan and El Jadida is the Pullman Hotel, attached to which is Royal Golf El Jadida, another 18-hole course. The presence of nearby ports and factories is responsible for the pollution of El Jadida's beaches.
At present, the city's main exports are beans, almonds, maize, chickpeas, wool, hides, wax and eggs. It imports cotton, sugar, tea and rice. The city is expanding as of 2014, partly as a result of increased activity at the nearby Jorf Lasfar port and industrial area. 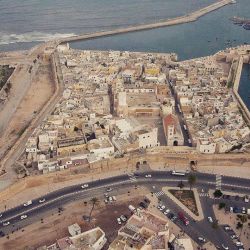