Debrecen (Hungarian pronunciation: [ˈdɛbrɛt͡sɛn]; known by alternative names) is the second largest city in Hungary after Budapest. Debrecen is the regional centre of the Northern Great Plain region and the seat of Hajdú-Bihar county. It was the largest Hungarian city in the 18th century and it is one of the most important cultural centres of the Hungarians. Debrecen was also the capital city of Hungary during the revolution in 1848-1849. During the revolution, the dethronement of the Habsburg dynasty was declared in the Reformed Great Church. The city also served as the capital of Hungary by the end of the World War II in 1944-1945. 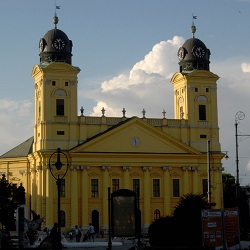