travelo.club - Guide to the city of Salzburg

Salzburg (German pronunciation: [ˈzaltsbʊɐ̯k]; Bavarian: Såizburg; literally: "Salt Fortress") is the fourth-largest city in Austria and the capital of the federal state of Salzburg.
Salzburg's "Old Town" (Altstadt) is internationally renowned for its baroque architecture and is one of the best-preserved city centers north of the Alps. It was listed as a UNESCO World Heritage Site in 1997. The city has three universities and a large population of students. Tourists also visit Salzburg to tour the historic center and the scenic Alpine surroundings.
Salzburg was the birthplace of 18th-century composer Wolfgang Amadeus Mozart. In the mid‑20th century, the city was the setting for the musical play and film The Sound of Music. 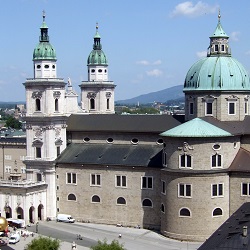