Taipei, officially known as Taipei City, is the capital city and a special municipality of Taiwan (officially known as the Republic of China, "ROC"). Sitting at the northern tip of the island, Taipei City is an enclave of the municipality of New Taipei City. It is about 25 km (16 mi) southwest of the northern port city Keelung. Most of the city is located on the Taipei Basin, an ancient lakebed bounded by the two relatively narrow valleys of the Keelung and Xindian rivers, which join to form the Tamsui River along the city's western border. Formerly known as Taipeh-fu during Qing era and Taihoku under Japanese rule, Taipei became the capital of the Taiwan Province as part of the Republic of China in 1945 and recently has been the capital of the ROC since 1949, when the Kuomintang lost the mainland to the Communists in the Chinese Civil War.
The city proper is home to an estimated population of 2,704,810 in 2015, forming the core part of the Taipei–Keelung metropolitan area which ...

includes the nearby cities of New Taipei and Keelung with a population of 7,047,559, the 40th most-populous urban area in the world—roughly one-third of Taiwanese citizens live in the metro district. The name "Taipei" can refer either to the whole metropolitan area or the city proper.
Taipei is the political, economic, educational, and cultural center of Taiwan, and one of the major hubs of the Chinese-speaking world. Considered to be a global city, Taipei is part of a major high-tech industrial area. Railways, high-speed rail, highways, airports, and bus lines connect Taipei with all parts of the island. The city is served by two airports – Taipei Songshan and Taiwan Taoyuan. Taipei is home to various world-famous architectural or cultural landmarks which include Taipei 101, Chiang Kai-shek Memorial Hall, Dalongdong Baoan Temple, Hsing Tian Kong, Lungshan Temple of Manka, National Palace Museum, Presidential Office Building, Taipei Guest House, Ximending, and several night markets dispersing over the city. Its natural features such as Maokong, Yangmingshan, and hot springs are also well known to international visitors.
As the capital city, "Taipei" is sometimes used as a synecdoche for Taiwan. Due to the ongoing controversy over the political status of Taiwan, the name Chinese Taipei is designated for official use when Taiwanese governmental representatives or national teams participate in some international organizations or international sporting events (which may require UN statehood) in order to avoid extensive political controversy by using other names. 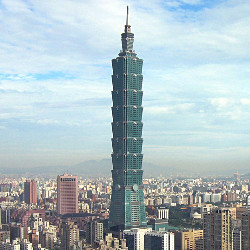