travelo.club - Guide to the city of Portorož

Portorož (pronounced [pɔɾtɔˈɾoːʃ]; Italian: Portorose, literally "Port of Roses") is a Slovenian Adriatic seaside resort and spa town located in the Municipality of Piran in southwestern Slovenia. Its modern development began in the late 19th century with the vogue for the first health resorts. In the early 20th century Portorož became one of the grandest seaside resorts in Adriatic, along with Abbazia, Lido and Grado, then as part of the Austrian Littoral. It is now one of Slovenia's major tourist areas. Located in the centre is the Hotel Palace, once one of the most important resorts for the Austro-Hungarian monarchy, and currently one of the finest hotels between Venice and Dubrovnik.
The settlement and its surrounding areas are served by Portorož International Airport which is located in the nearby village of Sečovlje. 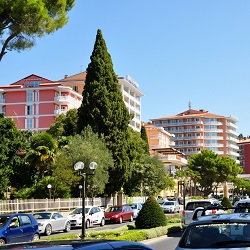