travelo.club - Guide to the city of Manila

Manila (; Filipino: Maynilà, pronounced [majˈnilaʔ] or [majniˈla]), officially the City of Manila (Filipino: Lungsod ng Maynilà [luŋˈsod nɐŋ majˈnilaʔ]), is the capital of the Philippines and the most densely populated city proper in the world. It was the first chartered City by virtue of the Philippine Commission Act 183 on July 31, 1901 and gained autonomy with the passage of Republic Act No. 409 or the "Revised Charter of the City of Manila" on June 18, 1949.
Spanish Manila was founded on June 24, 1571, by Spanish conquistador Miguel López de Legazpi, it is one of the oldest cities in the Philippines and was the seat of power for most of the country's colonial rulers. It is situated on the eastern shore of Manila Bay and is home to many landmarks, some of which date back to the 16th century. In 2016, the Globalization and World Cities Research Network listed Manila as an alpha- global city. The city proper is home to 1,780,148 people in 2015, and is the historic core of ...

a built-up area that extends well beyond its administrative limits. The term "Manila" is commonly used to refer to the whole metropolitan area, the greater metropolitan area or the city proper. The officially-defined metropolitan area called Metro Manila, the capital region of the Philippines, includes the much larger Quezon City and the Makati Central Business District. It is the most populous region of the country, one of the most populous urban areas in the world, and is one of the wealthiest regions in Southeast Asia. With 41,515 people per square kilometer, Manila is also the most densely populated city proper in the world.
Manila is located on the eastern shores of the Manila Bay in one of the finest harbors in the country. The Pasig River runs through the middle of the city. Manila is made up of 16 districts: Binondo, Ermita, Intramuros, Malate, Paco, Pandacan, Port Area, Quiapo, Sampaloc, San Andres, San Miguel, San Nicolas, Santa Ana, Santa Cruz, Santa Mesa and Tondo. Manila is also made up of Six Congressional Districts that represents the city on the Lower House of the Philippine Congress. 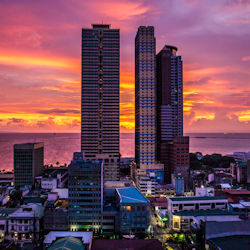