travelo.club - Guide to the city of Manama

Manama (Arabic: المنامة‎‎ Al Manāma IPA: [ˈmanaːma]) is the capital and largest city of Bahrain, with an approximate population of 157,000 people. Long an important trading center in the Persian Gulf, Manama is home to a very diverse population. After periods of Portuguese and Persian control and invasions from the ruling dynasties of Saudi Arabia and Oman, Bahrain established itself as an independent nation during the 19th century period of British hegemony.
Although the current twin cities of Manama and Muharraq appear to have been founded simultaneously in the 1800s, Muharraq took prominence due to its defensive location and was thus the capital of Bahrain until 1921. Manama became the mercantile capital, and was the gateway to the main Bahrain Island. In the 20th century, Bahrain's oil wealth helped spur fast growth and in the 1990s a concerted diversification effort led to expansion in other industries and helped transform Manama into an important financial hub in ...

the Middle East. Manama was designated as the capital of Arab culture for the year 2012 by the Arab League. 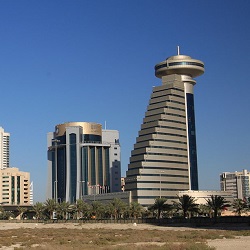